Cricket always had been one of the most favorite sports in our country Nepal. Nepal pulled a six-wicket victory over Thailand in the ACC U-19 Women’s 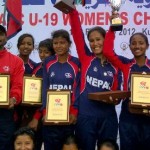 Championship Cricket Tournament on Friday to complete title hat-trick at Hubara Ground, Kuwait. Nepal had earlier lifted the title in 2008 and 2010.

Nepal is the only team to remain undefeated in all three editions of the tournament taking its winning streak to 19 matches in the ACC tournament.

Winning the toss Nepal invited Thailand to bat first on Friday and restricted them in just 74 runs off 22.4 overs. Nepal crossed the target after the completion of the 21st over with the loss of four wickets.

Thailand skipper Nattakan Chantam, who was dominating Nepali, was back to the pavilion in the 12th over in spinner Gauchan’s bowling. Chantam scored 22 runs and also shared a-24 runs partnership for the third wicket with Phira-on Khamla.

Chasing the total of 75 runs, Nepal did not start well. Nepal lost its both openers — Anuradha Chaudhary and Droupati Kunwar — on ducks by the second over of the innings. Indu Barma and Kavita Gautam shared a-17 runs partnership for the third wicket. Gautam was out scoring three runs while Barma (6 runs) was caught behind in Phira-on Khamla bowling. Nepal had scored 19 runs in seven overs losing four wickets.

Skipper Chhetri and Mamata Chaudhary shared a 56-run partnership for the fifth wicket. They faced 89 balls to set the partnership. Chhetri was not out with 24 runs off 45 balls with two boundaries while Chaudhary remained unbeaten on 21 runs off 43 balls with a boundary.

Chhetri also received player-of-the-tournament award for her all-round performance in the championship. Chhetri took 13 wickets and scored 71 runs playing all the six matches that Nepal had played in the tournament
Source: http://www.cricket.com.np/new/2012/02/10/nepal-defends-acc-u-19-womens-championship/