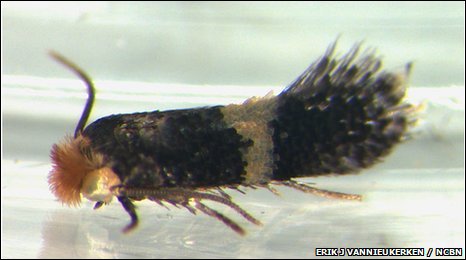 The 3mm-long micro moth, which lives in Hembury Woods in Devon, was recognised as a new species this year .

This week, the biologist who discovered it is presenting the Natural History Museum of London with one of the first known specimens.

The receipt of this “type” specimen will mark the official acceptance of the moth’s existence in the country.

The tiny micro moth, which has a wingspan of just 6mm, was first spotted in 2004.

Hembury Woods: home to the moth

At that time, amateur naturalist Bob Heckford sighted the unusual bright green caterpillars of this tiny leaf-mining moth on oak saplings within Hembury Woods, a site managed by the National Trust.

In January this year, the moth was officially recognised in the journal Zookeys as a new species, named Ectoedemia heckfordi after its discoverer.

It is not known to live outside of the UK