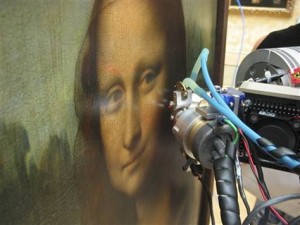 PARIS — The enigmatic smile remains a mystery, but French scientists say they have cracked a few secrets of the “Mona Lisa.”

French researchers studied seven of the Louvre Museum's Leonardo da Vinci paintings, including the “Mona Lisa,” to analyze the master's use of successive ultrathin layers of paint and glaze — a technique that gave his works their dreamy quality.

Specialists from the Center for Research and Restoration of the Museums of France found that da Vinci painted up to 30 layers of paint on his works to meet his standards of subtlety. Added up, all the layers are less than 40 micrometers, or about half the thickness of a human hair, researcher Philippe Walter said Friday.

The technique, called “sfumato,” allowed Leonardo to give outlines and contours a hazy quality and create an illusion of depth and shadow. His use of the technique is well-known, but

scientific study on it has been limited because tests often required samples from the paintings.

The French researchers used a noninvasive technique called X-ray fluorescence spectroscopy to study the paint layers and their chemical composition.

They brought their specially developed high-tech tool into the museum when it was closed and studied the portraits' faces, which are emblematic of sfumato. The project was developed in collaboration with the European Synchrotron Radiation Facility in Grenoble.

The tool is so precise that “now we can find out the mix of pigments used by the artist for each coat of paint,” Walter told The Associated Press. “And that's very, very important for understanding the technique.”

The analysis of the various paintings also shows Leonardo was constantly trying out new methods, Walter said. In the “Mona Lisa,” da Vinci used manganese oxide in his shadings. In others, he used copper. Often he used glazes, but not always.

The results were published Wednesday in Angewandte Chemie International Edition, a chemistry journal.

Tradition holds that the “Mona Lisa” is a painting of Lisa Gherardini, wife of Florentine merchant Francesco del Giocondo, and that Leonardo started painting it in 1503. Giorgio Vasari, a 16th-century painter and biographer of Leonardo and other artists, wrote that the perfectionist Leonardo worked on it for four years.