Charismatic personality and god gifted voice has made Raju Lama one of the popular pop icon in Nepal. I had a chance to have short chitchat with him on Jan 23 Seoul South Korea. It was program organized by Mustang community to celebrate lunar New Year in Korea. It was not a formal interview but I was so happy to meet him in person I couldn’t stop writing about him. 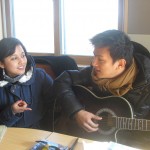 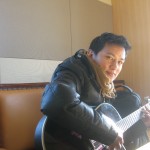 Here are some videos, below.

His song always had been great and I really admired his voice.  During this meeting I came to know not only his voice is good but also his personality is gentle. He expressed that he was too busy now-a-days in his tour concert that he barely has time for new album. His will to give best performance for the audience was admirable. Before his show he was planning hard to sing his songs and practicing too. That really touched my heart. Actually I was so excited I couldn’t talk too much. I took some pictures with him and bid farewell hoping to enjoy his performance. As per my expectations his performance was the best. Everyone who came to see his performance was overwhelmed by his god gifted voice. I wish him all the best and hope that he would release his new album soon.